The initial approach or slash

The defender should never keep his weight balanced evenly (commonly referred to in martial art terminology as "50-50."*) The defender keeps his weight back so that he can pivot, adjusting steps easily, until he is able to move in. In the scenario shown in the photo, the defender at right is completely surprised by the slashing attack. Being careful to stay calm, he observes the timing and positioning of the attacker, as the attacker moves toward him with short slashing movements. If possible, the defender times the slashing attacks.

NOTE: The ability to time an attack comes with experience and training. The attacker might slash with jerky movements or over exaggerated flailing movements. To effectively use Ba Gua in this type of situation, the defender must learn to observe subtleties that predict the angle and speed of the attack. An advancing shanghu step (not a step through) is applied. The defender, making his move, closes with the attacker. When the defender moves into this position, he places the backs of his arms and hands toward the blade of the knife. Thus, if he fails to move sufficiently past the danger area of the blade, he risks less serious injury.

NOTE i: The basis for this maneuver is that the defender has no other choice when he applies the defense. He moves forward quickly, exposing only the backs of his arms. Thus, if the knife does cut into the arm, this will result in less serious damage to nerve and blood supply than a slash to the inside. His right hand prepares to strike.

NOTE 2: The defender does not try to grab the knife or knife hand.

Keeping the weapon checked (not grabbed), defender again moves forward with a lead foot shanghu step, striking with open edge of the hand to the opponent's neck or jaw. The right hand is poised to assist, and the defender's body is coiled in a strike preparatory position.

NOTE: The knife is controlled by defender's position, not by grabbing the knife hand.

Here is a close-range variation of the same movements.

NOTE: As in the previous photo, the defender's outside left arm remains in contact with the attacker's knife-wielding hand.

Advanced Level "tests" for power and alignment of strikes are shown in this photo. "Rooting" and extending power from the rear leg to the edge of the palm or elbow.

Force like this should not be taken on the body without years of training in the correct principles. Premature practice of these tests against a forceful push may result in serious injury. (Because of this danger, I do not allow my students to take such force in the beginning. A lighter pressure is sometimes useful in training.) 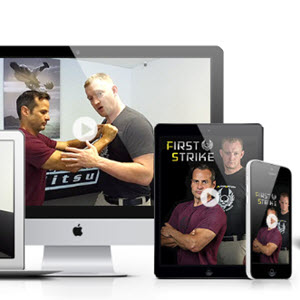 What is the best form of self defense for street fighting?